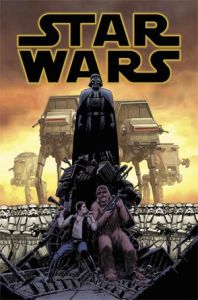 Jason Aaron increases the action in the second issue of Star Wars, which hit shelves on Tuesday. We left our heroes in a bit of a lurch. Han and Leia were taking charge of an Imperial Walker to break out of the facility, C3PO was dealing with scavengers dismantling the Millenium Falcon, and Luke was about to confront the murderer of Obi-Wan Kenobi and, supposedly, Luke’s father–Darth Vader.

As these scenes reopen, the focus is on Luke and Vader and the dramatic irony is prevalent. Neither knows yet who the other is, but Vader begins to put together clues while Luke struggles with his amateurish Force powers. Our hero of Yavin finds himself in the midst of a messy situation he made for himself as the slaves he freed in the previous issue enter the fray.

As the story moves from Luke to Han and Leia in the AT-AT to 3PO on the Falcon, the characters strive to overcome their individual struggles and make it off the planet alive, but they find a mixture of successes and failures. As Luke, Han, Leia, and Artoo makes steps towards the Falcon, 3PO suffers a sizable setback to their ultimate escape.

The writing and interactions of characters continue to be spot on. Han and Leia’s fighting and veiled flirting blends with the action surrounding them. The illusion of this being an actual movie grows with each page’s panels, influenced heavily by the speed of action. John Cassaday’s art continues to wonderfully evoke the actor’s emotional nuances. When he cannot show a face, as in the case of Vader, he uses shadow to fill in emotional content.

With our heroes’ backs up against the wall, the story’s tension is high. I can’t wait to see how they get their hinneys out of this sling.